BOOK ONE in the #1 Bestselling REBEL ANGELS series!

CLICK TO BINGE-READ THE COMPLETE SERIES TODAY FOR FREE IN KINDLE UNLIMITED HERE. 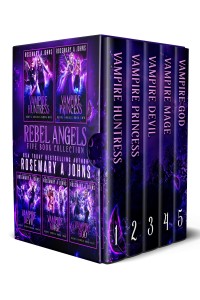 Vampires and angels are locked in a deadly war. But first, they want their daughter back.

Half vampire/half angel, Violet, was abandoned amongst the humans in London as a baby. Suddenly discovering monstrous powers on her twenty-first birthday, she thinks she’s the most dangerous creature to prowl the streets. She’s wrong.

When a snarky angel falls into her lap and her adopted sister disappears, she’s forced into a new role: Huntress. On the run, she’ll have to rely on a sexy vampire geek while facing off the harem boy angel threatening her sister.

And there’s only one way she’ll win: by letting out the monster…

But the deeper she’s dragged into the supernatural world, the more she struggles to survive, and it’s not long before she’s faced with impossible choices about love…and life.

From the award-winning author of the #1 Bestselling REBEL VAMPIRES  and REBEL WEREWOLVES series!

READ THE COMPLETE REBEL ANGELS SERIES FOR 50% LESS THAN THE PRICE OF BUYING THE INDIVIDUAL BOOKS HERE.

“With unique world-building, action, and plenty of romance, Vampire Huntress is a gripping page-turner that kept me reading until late into the night! I can’t wait for book two!” – Jenna Wolfhart, Urban Fantasy Author

“Rosemary A Johns has taken a bit of everything I love to read, smashed it all together, and delivered a novel I couldn’t put down.” – Carrie Whitethorne, USA Today Bestselling Author

“A very well-crafted story with plenty of action. The plot is unique. It’s twisting, full of surprises, and with a rare mixture of characters, all well-rounded and likeable. I enjoyed this story very much and would love to read the next in the series.” – Readers’ Favorite, 5 Stars

WANT TO READ THE NEXT IN SERIES? Order VAMPIRE PRINCESS now!

Rebel smirked. “If you win, I’ll take you out to fight a vampire by yourself.”

I licked my lips. That was what I’d been training towards in this woodland at the bottom of the House of Rose, Wolf, and Fox.

To be a huntress…

Rebel’s gaze was suddenly serious. “You could keep your promise not to escape.” Then he smiled shyly. “And call me Custodian…?”

I wriggled away from Rebel like a snake, before jumping up and rolling my shoulders. “My advantage? I fight dirty.”

Rebel’s eyes blazed, and his wings beat, whilst the snow fell in a furious flurry around him. “My advantage?” He unsheathed Eclipse; its flames coursed around its black core. “I fight with a sword.”

There are dark kisses that bruise your soul as well as your mouth. Kisses as soft as feathers. Light. Gentle. Kind. Whereas others blaze and burn to ash.

And then there are kisses that are a revelation.

As I drifted back towards the gray, once more out of the black, soft lips kissed mine.

The kiss didn’t bruise or burn but it was firm and possessive. Right.

Also available on audio book to listen to anywhere and on the go at Audible, iTunes, and Amazon: