The prequel to Rosemary A Johns’ USA TODAY Bestselling series REBEL ANGELS – VAMPIRE SECRET – can be read in a FREE boxed set! 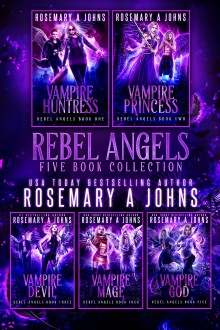 This is Rebel’s story, which is told in his voice, before he becomes the punk angel that falls into Violet’s lap in VAMPIRE HUNTRESS.

A rebel angel, Zachriel, flees Angel World.
Hunted by angels and adopted by the witch family of the House of Rose, Wolf, and Fox, he battles to fight his addiction to the human world.

But when he discovers the wicked secret of the witches’ house, he’s forced to choose between saving the rebel he’s sworn to protect…and saving his family.
Either way, he risks the dangers of both the Head Coven and Angel World…

Download VAMPIRE SECRET now and begin your FREE escape into the world of REBEL ANGELS!