In August a standalone novel from my #1 Bestselling REBEL ANGELS series is released in a boxed set with 22 other supernatural suspense and urban fantasy novels by bestselling and award-winning authors!

Here EXCLUSIVELY is the REVEAL of the opening!

You don’t know the moment you’ll die, but I’ll hear it. Because I’m magic, and my magic is death.

A dark wizard, I raise angels from the dead. I’m an angelmancer: a Lazarus Mage.

Or I will be, after tonight. 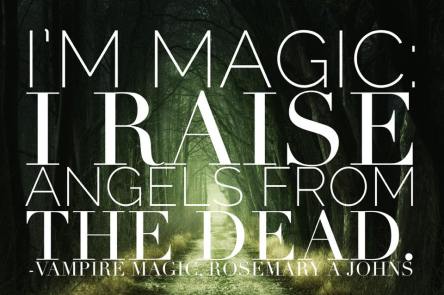 The sparkling glass ceiling above the stuffy lecture theatre split open, as if the heavens were breaking.

The stars in the black shroud sky bled closer. The moon beamed deathly white onto the entire student body of the Phoenix Academy.

Dark magics flayed the glass above, below Royal Blood’s guitar riffs blasted through my mind. I air guitared to psyche myself up, head banging until my long jet hair snarled: I was a wild thing, even though my heart thundered.

I brushed my hair back and smirked.

A hundred other Lazarus apprentices and mages, dressed in their best black suits, as if at a funeral rather than a birth, watched my unexpected performance from the bank of scarlet seats, their eyes gleaming.

On the most important night of my life, when I’d prove whether I’d earned the right to join the Legion’s army or would cock-up and be reduced to servant in the only home I’d known for over a decade, I slouched spotlighted on the stage.

Rocking on my heels, I attempted to smile as I swept my audience a bow.

I stiffened, staring at the marble floor like I could set it alight.

Everything had changed when I’d been only ten years old in a guitar lesson at primary school. I’d been practising chords as I leaned back in the plastic seat. I’d lost myself in the music, as the mingled aroma of floor polish and slow cooked broccoli had washed over me. Then it’d ripped through me: a banshee scream.

I’d dashed myself against the wall, pummelling the guitar into the plaster.

Until I’d reduced the guitar to jagged slivers. Then I’d pounded my head as well.

I’d bawled, clasping my hands over my ears to try and block out the screams…at the moment my dad’s throat had been torn out.

That was the first time I’d channelled death’s song. I’d heard my dad’s murder, and it’d sparked my magic. Worse? It’d been drilled into me at the Academy that I’d heard my dad being killed by fanged monsters — vampires. Yet I’d done nothing but sob. The Academy, buried in secret outside London, has trained me every day since.

Our Trainer, Ethan, glowered at me from the corner. His mustard suit and embroidered waistcoat were as smart as his afro, despite the scar running from his forehead to his right eyebrow: the smooth prick knew how to climb the ranks. He lounged against the high gilt door, his powerful arms crossed over his chest.

No chance I could make a run for it then.

Despite my guts twisting that I’d screw up the ritual, however, I’d earned my place as an angelmancer.

Wasn’t the blood sacrifice of my dad enough?

The sound when an angel died wasn’t like a vampire’s wail. It was the beat of a thousand wings, over the thunder of martial drums: a warrior’s send-off. And those angels were born again into the Legion of the Phoenix’s army, just as I’d been adopted into their ranks as an orphaned, human kid.

Tonight, I’d raise my own Phoenix because it was my twenty-first birthday.

And who wants a Les Paul guitar as a present, when you can have your very own angel slave?

READ THE REST OF THE NOVEL HERE NOW for 0.99 in THE SHADOW FILES!